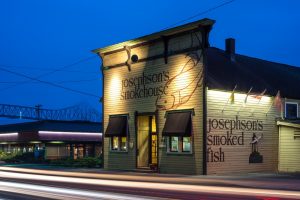 A gentle billow of smoke, sweet with the rich aroma of salmon, escapes the smokehouse door as we peek inside. A century ago, in 1917, Mike Josephson’s grandfather, Anton Josephson, tried his hand at smoking fish fresh from the docks. Starting in 1920, Josephson’s Smokehouse opened at the same storefront you can find it in today, just past downtown Astoria heading westbound on Marine Drive. 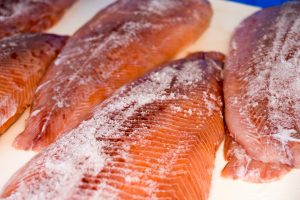 In the cold case at the Astoria Cooperative Grocery you can also find Josephson’s smoked salmon and salmon jerky, custom packed for the Co-op.

Cold-smoked is the traditional Scandinavian style originally used by the Josephson family. The salmon is cured in salt, then rinsed, and smoked. The relatively cool temperatures used (90 degrees Fahrenheit or less) means that the fish is preserved but maintains a delicate silky texture that can be sliced, whereas hot-smoked fish is cooked to a firm texture that can be flaked into pieces. Smoked salmon retains the bright color of the wild fish due to the smoking process itself. The flavor also becomes richer, more complex. 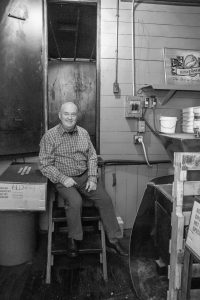 Traditional meets modern at Josephson’s Smokehouse. In the back of the building they still have a room set up to cold smoke large sides of Chinook salmon, hanging from individual stainless steel hooks, for 5 days, in the smoldering smoke of Alder logs (a tree still found in abundance on the North Oregon coast). For Mike’s dad and grandfather, “This was the only way they ever smoked fish, and I did it for a lot of years, too.” Mike says, adding, “My friends used to joke because we’d be out at a dance and I’d say, ‘well, we got to go to the smokehouse and check on the fire.’ So, they’d come back, and they were all familiar with the process.”

Nowadays, Josephson’s primarily uses a modern smoker that’s run by a computer using specialized software to control and monitor the process, along with precisely controlled smoke generators stoked with a blend of Alder wood chips. Mike says the current preference people have is for what they produce in the modern smoker. The traditional method creates a heavier smoked skin; it’s drier, and somewhat reminiscent of a ham. Since there are some people who really love it, Josephson’s smokes about 3 batches a year of the traditional style. 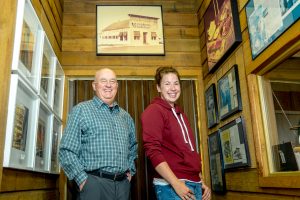 If you stop by Josephson’s Smokehouse you’ll most likely meet Ashley Moore at the front counter. Astoria born and raised, she’s worked at Josephson’s for 10 years now, starting when she was just 17. Ashley says she’s never caught a fish before, with the caveat that she did proudly reel in some seaweed at the age of 7. She knows the Smokehouse well and can offer knowledgeable answers and delicious samples.

Mike’s father, Cecil Josephson, was a fisherman. In the main room there’s still the loft where the nets were stored, and in that room Mike says he vividly remembers his dad melting and attaching the metal lead line to the nets. The current entryway walls are decorated with old photographs, and what is now the storefront was the living room for Mike’s grandparents.

Mike started helping out at the Smokehouse at age 12, using a wire brush to clean the rust and fish scales off of what were then steel hooks used in the smoke room. Pointing to a heavy wheel-shaped contraption leaned up against the wall Mike explains that it was the hoist they used in the cannery that they cranked by hand, lifting tens of thousands of pounds of Columbia River Chinook from the boats.

Josephson’s produced just one product for 60 years, until after Mike took over the business from his parents in 1978. They’ve since diversified to create 7 flavors of salmon jerky, 23 types of canned fish, 18 types of hot smoked fish and shellfish, and 3 types of cold smoked salmon lox.  They operate an extensive mail-order business, shipping worldwide from their historic storefront on the bank of the Columbia River.