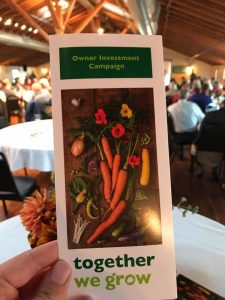 Our grassroots effort to make a bigger store a reality has sprouted! Our business, a consumer-owned cooperative, has launched an owner investment campaign called “Together We Grow”, and we’ve already raised $430,000!

Preferred shares are an issuance of stock for Oregon residents who are Co-op owners. The shares are available starting at a minimum investment of $2,500. The Co-op is issuing 25,000 shares each with a value of $100 and is selling them to raise equity for the expansion. The annual dividend is 3% and for those who invest $10,000 or more the dividend is 4%.

The Co-op’s portion of the project to build a new store at 23rd and Marine drive in Astoria, is about $3.8 million with a minimum of $1.5 million coming from owner investments. Co-op General Manager Matt Stanley feels the Co-op can beat its minimum goal of $1.5 million and is aiming to sell as many of the shares as possible, totaling $2.5 million.

The Co-op sources many goods from local producers and looks forward to growing the marketplace for local food. For every dollar that’s spent at the Co-op, 52¢ goes back into the local economy, according to a report by National Co-op Grocers.

The Co-op has been in the community for 43 years with a proven track record including double digit growth in the last five years and growing owners, recently reaching 4,000. This success has led to the Co-op needing more space and amenities. The new store will have a much-needed loading dock, more parking, a larger deli, fresh meat/seafood counter, and wider selection of organic and local produce.

Expansion and investment information is available at www.astoria.coop or stopping by the store.