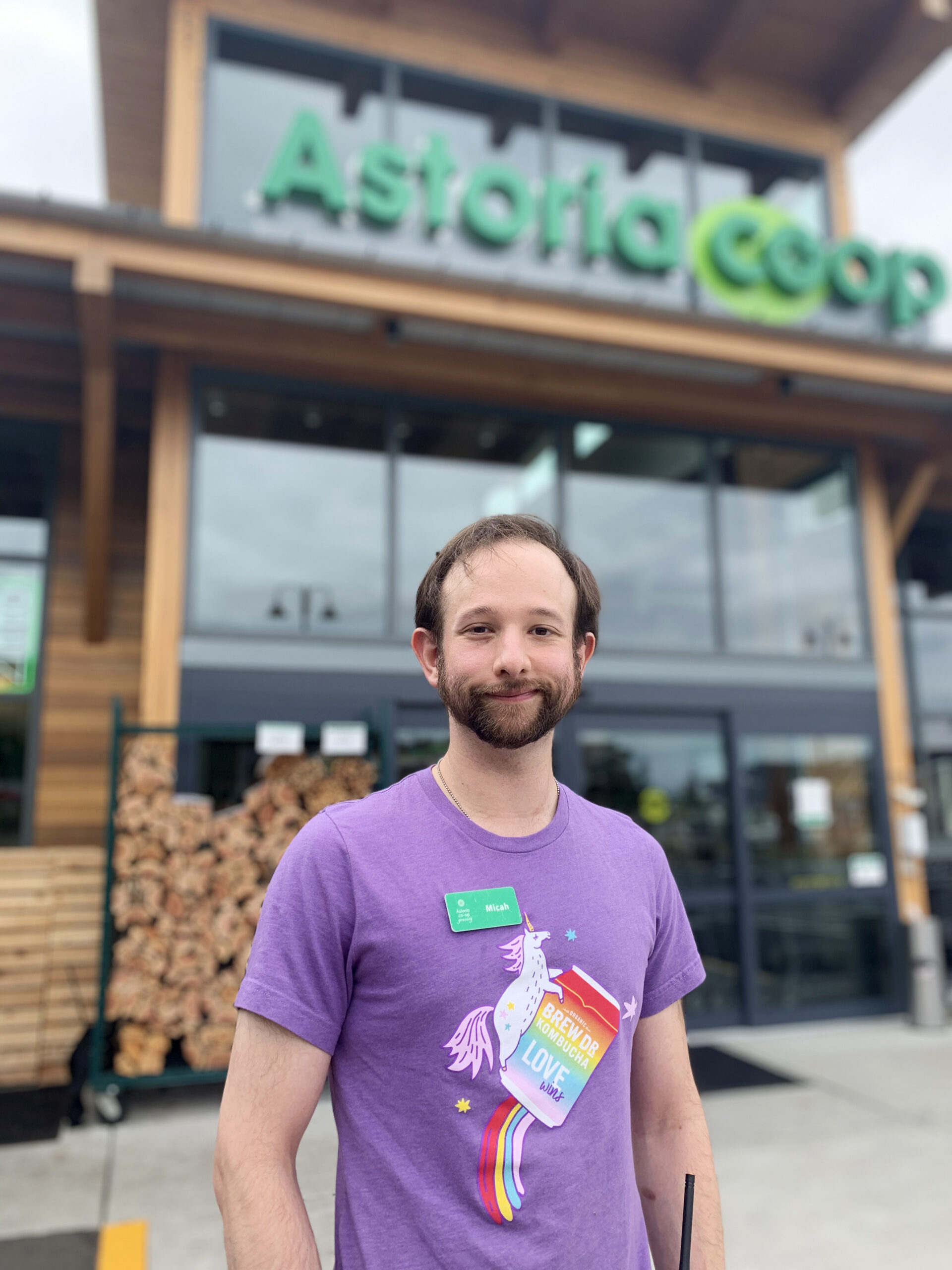 Born and raised in Astoria, Dugan went to Clatsop Community College and Portland State University to earn his degree in media studies before returning to the area.

His interest in writing began when he was in middle school and he became attracted to the therapeutic aspect of poetry. His work has been published in literary publications and he still writes poems every day. He also began writing comedically during college and got into performing stand-up comedy.

“I was always interested in the writing aspect but also experiencing laughter and pure joy, and being a small part of causing that is amazing,” Dugan said. Before the coronavirus pandemic put a halt to performances, Dugan had been doing stand-up comedy regularly and getting paid for it.

In August 2017, Dugan started working at the co-op as a cashier, then in the grocery department, and became a PIC when the co-op moved to its current location and expanded its staff at the end of 2019.

He described PIC as being an interactive role providing oversight and enforcement of the store’s policies. All PICs have their respective departments, and Dugan’s is grocery.

He added that working in grocery has introduced him to new foods and inspired him to live a healthier lifestyle than what he grew up with.

“Working here, being exposed to quality ingredients and products helped change a lot about my life,” Dugan said. “I’ve lost 80 or so pounds in the past couple years being here.”

“I fell into a healthier life and I’m thankful for it,” Dugan added.

Some products he’s excited about include Majestic Garlic spread, Zimmerman’s honey, Elegant Tuna and Sweep the Leg Japanese rice lager from Level Beer. He’s also a big fan of Ivan’s Columbia Bars. Dugan first met Ivan when he was just starting out and looking for space to sell his bars, so Dugan introduced him to co-op grocery manager Brian Marchello and got his product on the shelves.

Dugan is looking forward to citrus season, when he can get citrus like kishu and TDE2 shasta mandarin oranges.

“At the end of the day, it’s nice I don’t punch the clock for a corporation, and that I know 70% of the customer base I interact with,” Dugan said. “Knowing I’m dedicating my time to a healthy cause is rewarding. It’s something I’m very grateful for and I don’t take it for granted.”