October is Breast Cancer Awareness Month, and an upcoming talk sponsored by Astoria Co-op Grocery brings the issue into focus with a different take “pink ribbon” messages you typically hear. Speaker Laura Snyder says there are pervasive myths surrounding breast cancer. With data and statistics Snyder will suggest much different action plans for individuals and groups concerned about breast cancer. 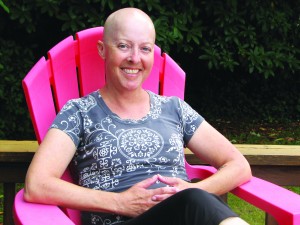 Snyder is a 52-year-old proud mother of two teenagers. She is a former bookseller and Astoria school board member. These days, she is a full-time metastatic breast cancer patient. This includes medical appointments, medication, scans, waiting for results; the usual for the estimated 155,000 metastatic breast cancer patients living in the U.S. today. Part of it is educating herself and others and advocating for action to channel public and private money to scientific research that can make a difference in patients’ lives.

“The goal of this talk is to change the entire paradigm of breast cancer awareness in our community to a new awareness of what is actually needed to end breast cancer. No one dies of early stage breast cancer. It is only when it spreads, or metastasizes beyond the primary site to bones, the lymphatic system, and vital organs, that it becomes a terminal illness,” Snyder said.

Snyder says awareness has taken on an iconic tone, when in fact it does not save lives.
“I would like to debunk these myths and challenge the sexualization and commercialization of the breast cancer cause. I hope that the talk will give people tools and ideas to change awareness to action,” Snyder said.

Snyder’s lecture is on Thursday October 8 at the Fort George Lovell Showroom at 426 14th Street in Astoria. The talk begins at 7 p.m. and goes until 8 p.m. Doors open at 6 p.m. and food and drinks are available for purchase from the Taproom. There will be time for questions and answers. The event is free and open to all ages. It is part of Astoria Co-op Grocery’s food and wellness lecture series, Beers to Your Health, ever second Thursday of the month at Fort George.